We left at the top of the tide to clear the sandbar south of Isla Canas and motored south through the narrow, reef-strewn Santelmo pass on the southern side of Isla Rey.

Here at Rio Cacique we are again quite alone. Anchored in a broad sandy bay with good holding in 6 m of water. Around us manta rays are leaping and flopping onto the water, something I have not seen before. Huge raptors soar in the thermals, pelicans sit and look important, while frigate birds swoop gracefully. This afternoon we will take the dinghy up the river with the flood tide. But first, pancakes.

Miss Perfect has discovered my secret stash of dried pulses – bag after bag of them, stowed under the nav seat. They would have fed the crew for several years I reckon, but she insisted they be turfed. True, their average expiry date was late 2007, but the occasional weevil would have only meant more protein. Still, you can’t argue with Maxine when she’s in cleaning mode. The boat has risen on its waterline.

It is 300 miles out to Malpelo and another 300 miles south to Bahia Caraquez. Malpelo is a lonely rock with no anchorages and a population of 4 Colombian military personnel. We need to sail west to the island before turning south, to avoid the strongest of the Humboldt current and the squally weather near the coast. I am allowing 6 days for the passage. Unfortunately we just don’t have enough time to potter down the Colombian coast, with its headwinds and that pesky current. I read of one yacht which managed just 2 knots through the water motoring at 2,500 rpm along the inshore route. You’d need a month to enjoy it. After all our research this is a disappointment, but there you go.

Maxine’s engineering expertise continues to increase. She’s already done winch maintenance (with only one circlip lost over the side) and today, after her trip ashore, her lesson was in outboard shear pin replacement. Now, in the cool of the evening, we have no choice but to suffer the Brahms clarinet quintet and bloody marys, as manta rays leap and belly-flop all around us. On the last of the flood tide we drifted up the river, through dense mangrove forest. A spotted ray slid under the dinghy, egrets picked their way along the shore, a native canoe sat on a shingle bank and strange noises filled the air. 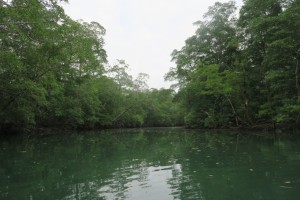 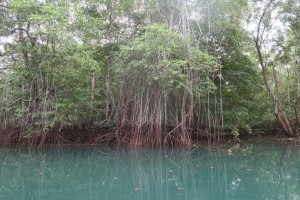