For many years I have wanted to make a pilgrimage to Ravenna. Here in Venice I had contemplated sailing 75 miles down the coast to Porto Corsini, from where it is a short bus ride to San Vitale. Sitting in the sun by the Grand Canal this morning however, with coffee, a spritz and an excellent book, I made an executive decision about Ravenna – I bought a train ticket instead. What a smart move for an old man.

Having missed the bullet train I took the slow but pleasant milk run through sunlit orchards, vineyards and cornfields via Padua (where Galileo once held a university lectureship) and Ferrara.

After the chaos of Venice, Ravenna’s meagre handful of tourists barely touches the sides. A gentle balmy day, perfect for wandering aimlessly through the old town to the basilica. In the church the silence was deafening.

The basilica of San Vitale was financed by a wealthy Greek banker in the 6th century, when the Greek economy was more substantial. It is surely the greatest surviving Romanesque church in Europe. A massive octagonal structure, it has flying buttresses, which I thought were a gothic invention. No wonder it has withstood the ravages of time so well. I wished Jane and Mark were here to give architectural advice. Like geologists, architects are never around when you need them.

But the basilica’s claim to fame – utterly deserved – is its ravishing array of mosaic art. You’d expect the interior to be gloomy, as is so often the case in romanesque churches, but these 1,500 year old frescoes bring remarkable lightness and warmth to the apse, the vault and the mausoleum. They are luminous, their vibrant colours absolutely breathtaking. These pictures say it better.

The things reverence and money can achieve! 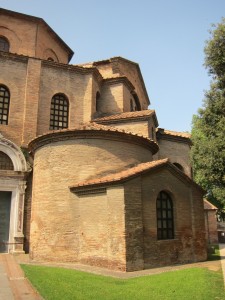 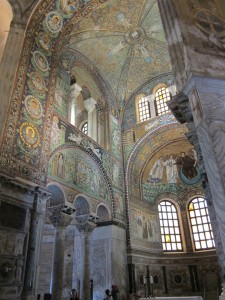 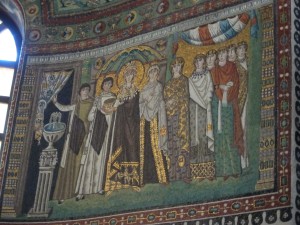 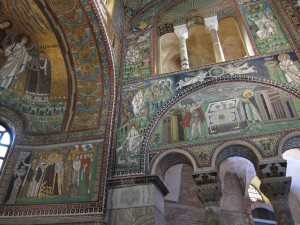 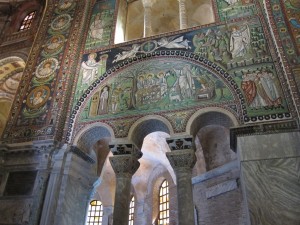 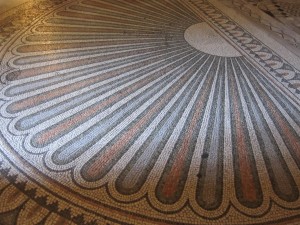 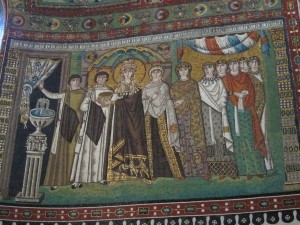 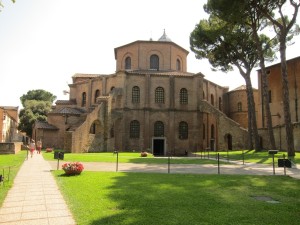 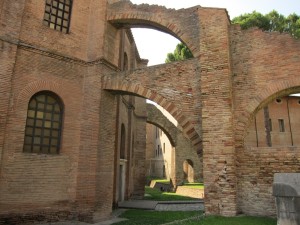