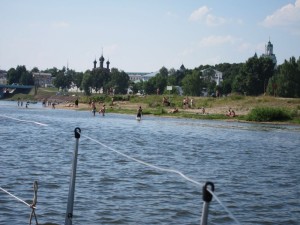 The Volga hereabouts is lined with onion-domed churches. To me, three things stand out about them – they are striking and very beautiful structures, they suit their setting perfectly and they display unexpectedly strong Islamic architectural influence.

Yaroslavl has many fine examples. Today we decided to visit the Church of St John the Baptist, noted for its fine frescoes and its 15 green onion domes. More domes than any other church in the vicinity, if not all Russia, they say.

We called a taxi. The driver, who to Dirk’s irritation was morbidly obese (Dirk has a problem with obesity in others), had never heard of St John the Baptist or a church by that name. We pointed the spires out to him visually, and on google maps. But he refused to acknowledge the existence of such a place. He called his control officer who also had not heard of the church. Maxine’s fluent Russian was not at fault, we knew. So we cancelled the cab and called another. Our second driver, a svelte young bloke, was also mystified by our destination. But he rose to the challenge and agreed to take us. 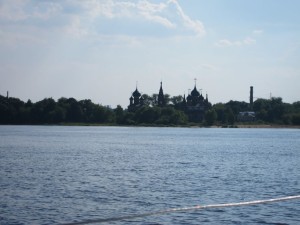 The church we had identified stands proud on a headland at the entrance to the Kotorosl River, opposite our marina. Finding it should not, we thought, have taken rocket science. When I showed the driver a photo of the church on my pocket camera he stopped the taxi and got out, took my camera with him and showed the picture to an old lady waiting at a bus stop. Armed with her instructions he drove on and we found what we thought was the object of our search. Along a dirt track in the trees on the shore of the Volga. 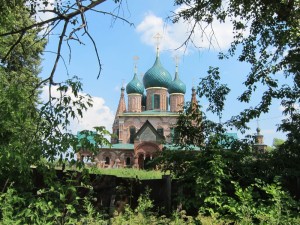 Our church was indeed grand and inspiring. 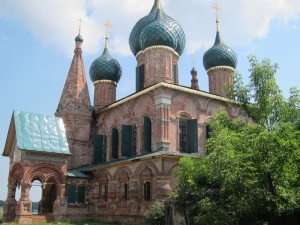 But a couple of things were not quite right. Firstly, we could only count 14 onion domes, not the requisite 15. Secondly, it was barricaded and quite decrepit. Thirdly, there was no sign of an entrance or tourist facility. I was captivated by the combination of stately grandeur and decrepitude, but we knew it was not the right church.

To cut a long story short, with the aid of Maxine’s iPad internet connection and our driver’s infinite patience we found an address for the Church of St John the Baptist, which turned out to be in an industrial estate 3 miles from our 14 dome mistake. And this church had 15 domes and magnificent frescoes. The pictures below speak better than my words. 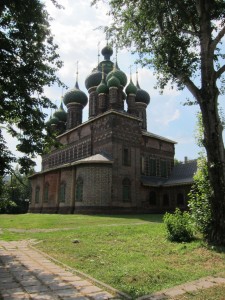 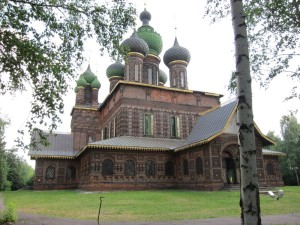 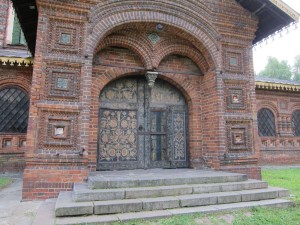 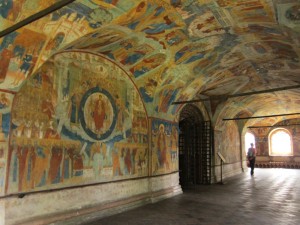 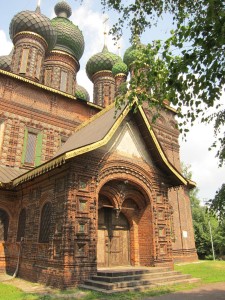