We anchored last night behind an island in a gorgeous calm spot, on the eastern shore of Lake Onega. Cuckoos called from the forest and the breeze was warm.

My battle with gravity and general senescence is relentless. Nouns depart, synovium disintegrates, hair gets thinner. Today is my birthday and I did not need reminding of the process. But I was. I will tell you how I celebrated it. Over calm seas we sailed south down the lake to the mouth of the Vytegra River. For my birthday I cooked pancakes on the way, took my obligatory power nap then unblocked a toilet.  Meanwhile Maxine filled the tanks with pristine Onega lake water. Then it was time for a celebratory tipple. The only alcohol we had on board was a bottle of cognac poor Max left behind when we took him to hospital in Belomorsk. That’d go very well with orange Tang, I thought. Stupid old man. I found a canister of the orange powder mix (ca 1996) and we drank to the success of Tainui’s voyage. The mix was a bit gluggy, and after we were half way through I realised that I had used Metamucil, not Tang, with the cognac. Very stupid old man, indeed. Young readers take note. 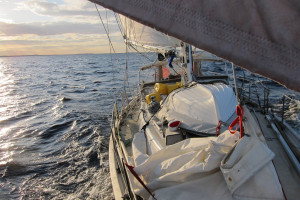 After 50 leisurely miles south we entered the Vytegra River at 10pm.  A long and lovely motor up river between thick forested shores led to the commercial basin where we are now tied up. Coasters on all sides are loading rich smelling pine logs. The brown waters are flat calm. It would be idyllic except for the ten billion mosquitoes.

The south end of Lake Onega is visited by a few yachts each year, all of them either coming from, or going to St Petersburg. But Vytegra is beginning of the route east to the Volga. Altogether another story. No cruising yachts come this way. We are at the beginning of the real journey.

13 thoughts on “On Getting Old”