I will mention this tedious business once, for completeness.

All refuelling in Russia is by drum. Our 7 or 8 five gallon jerrycans are loaded into a rusty Lada taxi and we clamber in on top of them. It is hot and the windows are closed. There follows a long conversation between Maxine and the driver, in Cyrillic of course, while I relinquish all control once more and dream of cold beer. Then the radio is turned up to shriek levels, and off we bump along a dirt road to a petrol station miles out of town. We join a long queue of old soviet trucks, Ladas and Hummers. We sit and wait. So far we have found clean-looking diesel and I have not, for my sins, been filtering it at source. Fuel is cheap. Eventually, after the jerrycans have been refilled, we return to the boat and load them on board. 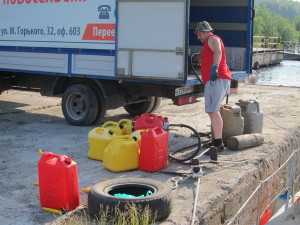 The much easier alternative, if we’re lucky, is to line up a local entrepreneur to bring down some big drums of diesel and a pump. Then the process is less stressful.

Tainui’s tankage is about 400 litres, in 3 separate stainless tanks.  Transferring fuel is messy despite the most careful preparation. Our tank air breathers and small, so as levels rise invariably there is a great eructation of foamy diesel up the filler, all over me and the deck. Also, I can only tell how full they are by computation since last fill (3.8 litres per hour x engine hours run) and the sound at the filler as I pour. Despite a reasonably musical ear I do not find this foolproof. The other problem is movement of the yacht. The tanks are baffled of course,  but any rolling motion makes a nearly filled tank regurgitate like an overfed baby. But the job is at last done. It is a pain, but the job is certainly easier here in flat water than at sea.

At the supermarkets, all of which seem plentiful and well-stocked, we wander about and grab anything which takes our fancy. This method is slapdash, more expensive but quick. Long gone are the days when I would itemise menus and buy judiciously according to the week’s menus.

There are good vegetables, breads, meat and dairy products.  I recall that Brazilian fresh meat market David and I visited once in Bahia de Salvador. I still have dreams about those whole goat heads with eyes looking up at me pleadingly, floating in buckets of bloody water, and the trotters and knuckles lazing about in 100 gallon drums of oily sludge.

At the checkout an obese, haemorrhoidal woman behind us in the queue looks at our 6 bottles of vodka, 6 beers and the white wine cask with barely concealed distaste. Using eloquent charades I explain to her that Maxine has a drinking problem and this is the beginning of her slow withdrawal. She isn’t amused, nor is Maxine.