A couple of days ago we passed Marx and are now tucked into a little marina at Engels, opposite Saratov. Like many other places we have been, this is an old commercial ship basin, slowly dying. As in Samara, it is being taken over by the fast plastic boat industry. For now, the mix of old and new is touching.

For Tainui, this is where we are saying goodbye to Dima and Gerda, our splendid crew for the last fortnight. They will be missed. 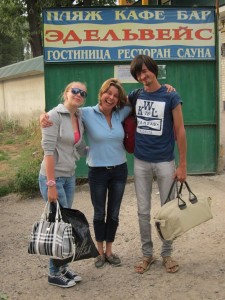 Readers will know Engels as the home of Engels Trumpet Factory, now a major producer of tubes and piping. Engels seems still to be emerging from from the tribulations of perestroika. Along the rutted dirt road from the marina are tiny stalls with meagre displays of fruit and vegetables. Clusters of picturesque timber dwellings sit among the trees and little old ladies with head scarves toil in small garden plots. Life does not seem easy for these folk.

But change is apparent and proceeding apace – smart cars are driven by blinged young things and on the water there are pristine gin palaces and jet skis.  The grand bridge across to Saratov is raddled with concrete cancer but upgrading is under way. Saratov boasts some fine old architecture and some dreadful new stuff (see above), a DHL office which has consigned our dead Yellowbrick transmitter to UK, a warm and summery ambience and a splendid art gallery which should not be bypassed by visitors. 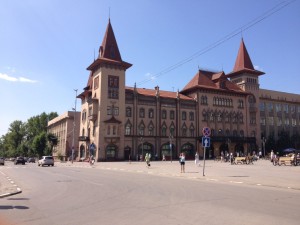 Traditional home of the Volga Germans who were sent packing during WW2, their influence is everywhere apparent. Long closed to foreigners because of its importance as an air base and centre of military manufacturing, Saratov is clearly coming alive.

We have fresh northerlies with a 200 open fetch down to Volgograd (Stalingrad). What a great spinnaker run today’s passage would make!

2 thoughts on “Marx and Engels”