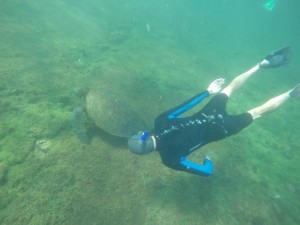 Day seven. Isla Isabela. Or is it day eight? The days seem to merge with one another out here in the Galapagos.

We sit in Tainui’s cockpit in this lovely, protected anchorage and watch the tourist boats come by. They are laden with passengers sitting all in a row, wearing matching lifejackets. Cameras ready. They are heading for a low lying lava spit which is a popular roosting place for the blue footed booby. These are big, handsome birds, with dirty brown and white plumage and they like this place because their fishing ground is right there. The tourist boats pull up nearby and stare at the boobies. Click, click. The boobies stare impassively back.

One of the nice things about the Galapagos is that the animals are completely indifferent to humans. The crew of Tainui like blue footed boobies very much. When the tourist boat has gone we motor over in the dinghy and watch while they soar gracefully, tuck in their wings, neck extended and plummet into the water. When they have finished fishing they retire to the rocks again and rest. Posing. They are not like seagulls with their perpetual squabbling. They perch quietly and gaze at us. We gaze back. We wonder what is going on in those little bird brains. Do boobies have thoughts? They seem to be meditating, but I doubt that they are thinking about anything. They just are. This bucolic little vignette would be incomplete without describing an encounter with a park ranger aboard one of those tourist boats. An overweight lady as they all seem to be. She pulled alongside and stridently demanded, “Get back to your boat! Get back to your boat immediately!”

Bureaucracy in the Galapagos is as remarkable as the unique wildlife. You are not supposed to do anything without a guide. Even a snorkeling trip a short dinghy ride from your boat is forbidden. The skipper, who has a low tolerance for bureaucracy, took his time obeying and for the next several hours was heard him muttering with outrage.

When travelling by yacht you delight in small incidents. Next day I was untying the dinghy in preparation for going ashore, without paying too much attention. to what I was doing. There was a loud bark. I had disturbed a young sea lion who had chosen our dinghy for a snooze. He was a well mannered youngster with an appealing, puppy face. He looked up at us with a hurt, innocent gaze as if to say, “I’m sorry I didn’t ask, but you’re not really going to make me go back in the water are you?” Unfortunately we needed to go ashore. We waved at the sea lion and, taking his time, he slipped over the side. Next morning we were visited by four penguins who for some mysterious reason spent half an hour gambolling about the boat before heading off to pursue further penguin business elsewhere.

Anna and I feel very privileged to be here with our old friend John. We have known each other for 35 years, ever since we met while cruising in the south west Pacific. We are acquainted with Tainui too, having spent three weeks aboard, sailing from Trinidad to Puerto Rico, some five years ago. We are very fond of both man and boat. Tainui is a working vessel. No polished brass or shiny varnish. Cosmetic niceties are a low priority. And you could say the same about the skipper. Rumpled, bearded, laconic, with an arch sense of humour. There’s a running riff on board where the skipper affects world-weary resignation at the foibles of his crew. We respond in similar vein, as he has a few foibles of his own. He likes to test us. When approaching a tricky anchorage John will retire below with his kindle, leaving us to be responsible for piling his ship onto the rocks. But then John’s idea of tricky is probably quite different to ours. I suppose after sailing for ten years to the edges of the Arctic and Antarctica, a bit of fair weather pilotage in the Galapagos is hardly a challenge. We feel privileged, maybe even a bit superior, to be traveling this way. When we share an anchorage with one of the big cruise boats we feel thankful that we are not on one of them

Wildlife is everywhere. When you go ashore you have to pick your way between the iguanas and sea lions. And their turds. Here on Isabela we did the celebrated los tunelos tour. At one stage while snorkeling we came across a pair of penguins drying out on a rock about a foot above the surface. They were quite indifferent as one snorkeler after another swam to within a couple of feet to pose for pictures. On that same trip we dived to caves where white tipped reef sharks lurked, swam along with stingrays and turtles and seahorses. And we saw birds – lots and lots of splendid birds.

Now we are back in Santa Cruz, after a very pleasant forty mile sail from Isabela. It’s like returning to the metropolis. There are sixteen cruise boats in port. And one particularly ugly one right next to us runs his generator all night. Water taxis and rubber duckies roar back and forth from dawn until late at night. It’s nice to sit in the evening cool with a rum and something in hand and watch the activity. It is here that we will say goodbye and ride the jumbo back to Oz.

It has all been pretty special.