We turned south into the Bosphorus just after dawn. There were more AIS targets on the chart plotter than I had seen since the entrance to the Elbe. But across the separation zone things went smoothly and we just followed the GPS track of Jason and the Argonauts.

Since Azov I feel I have been closing doors on this summer, one after the other. I am finding it unsettling. At the Don river mouth we bade farewell to Russia, in the Straits of Kerch we left the Sea of Azov, and in Sinop we finally had the Black Sea crossing behind us. Now, I can’t say I am sorry to be leaving the Black Sea – it a splendid cruising ground which deserves a summer all of its own, but getting west to the Bosphorus has been a bit of a trial. 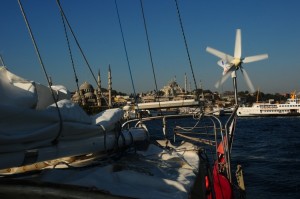 Istanbul embraces its waterway like few other cities. In Tainui’s logbook New York, Rio, Stockholm and Sydney are also notable examples of  grand city landfalls, of course. Sailing past the Golden Horn this morning we ogled at the skyline while barely dodging all those ferries and then, further south, the wall- to-wall fishing boats.

It is a gorgeous morning and our specially amended cranberry juice mixture is quite apposite. After Rosie’s pancakes Tatiana has produced fresh grilled sardines while Pasha remains attached to the helm as to a Siamese twin. How Maxine would love this.

Meanwhile, I just sit and sip. I am feeling quite overwhelmed by the relentless succession of new experiences which this summer has brought Tainui and me. I look back and wonder whether I will ever be able to see them in the perspective they deserve.

Now Tainui is resting in Atakoey Marina, surrounded by pristine bling boats with covered toerails, fenders in nappies, stainless steel anchors, oblique windows, paunchy blokes with captains caps and leggy young things. Ian’s Eurovision Song Contest boats. They are the first yachts we have seen in ages. Beside them Tainui is scruffy and battered, but very proud indeed. And so are we.