This is a long post but I feel the need to set down some aspects of Russia’s dark underbelly. They have loomed larger here than elsewhere, as we had been warned they would.

Our epic, 2 hour trip down river from Obukhova to Azov was a delight. We still cannot get used to the clear decks, the mast above us, shrouds and stays where the are supposed to be, and above all the gentle and proper motion of a balanced yacht. In a short inlet in the commercial port of Azov we tied up at our bespoke wharf. The water was glassy. Boatmen shovelled gravel into flour sacks, friendly dogs waited patiently for food scraps, adolescents sat idly in boom box Ladas, old men stood immobile with fishing lines equally immobile, while an endless parade of ships passed sedately by our stern.

Gateway to the Don River, Azov is a small town whose entire purpose is directed towards the loading, unloading and service of commercial ships. Just my kind of place. But it has no experience with yachts and its  bureaucracy seems quite unable to cope with us. Maxine and I walked across to the port authority for the first of many meetings. After passing through the by now familiar barrage of wrong buildings, relocated departments, turnstiles, steel security doors and progressively more senior uniformed officers we were finally led up a crumbling, ill-lit staircase into the quiet and overheated office of someone with many stars on his epaulettes. A nice young bloke, he was at first confused and then bemused by us and our request to leave Russia. Maxine worked her magic tirelessly and he warmed to the novelty and challenge of finding a way to help.

You would have thought that Tainui required only a simple series of stamps and signed clearance papers. But no, it is not that easy. The problem is that we are not part of the usual process. Dealing with thousands of commercial ships every year is simple because the procedures are well-established. But there is no bureaucratic pathway for a phenomenon like us.

First we were told that we had to sail Tainui back to Rostov to the regional head office, for processing. We explained that there were bridges lower than our mast and that was not possible. Even if we were to drop the mast again, we could not clear Russia from Rostov because then we would have to come back down river and stop for 3 days at Obukhovka again, to repeat the mast installation exercise. We told him we had driven up to Rostov from Obukhovka yesterday and the passport office there said they could not help us. Finally they accepted the logic of this and began searching for other ways of sorting things out.

Port authority, customs, immigration and FSB (KGB) officials are all genuinely keen to help us. It is the maze of conflicting legislation, regulations and protocols which confound them. They are apologetic and, I think, slightly embarrassed by our difficulties.

Finally we were told to repair to the boat while they tried to find a way of sorting things out. What we needed most was some sort of official document from the KGB in Rostov, granting the Azov authorities here permission to process our clearance application. We were told we needed to write a letter to Rostov requesting this document. Fortunately a nice young immigration officer who came down to the boat helped us draft our letter and undertook to see it dispatched to Rostov without delay.

Relieved, we settled back into a calm evening to enjoy Rosie’s most splendid chicken satay. Then a uniformed official came down to the boat to tell us that we had to move 200 metres downstream and tie up for the night at a customs secure area, between 2 huge ships on the main river. So we motored out into the dark to locate our nominated spot in the blaze of port lighting, only to be told over the radio that we had to go back because there was a series of complicated shipping manoeuvers about to begin. We did so.

An hour later we were informed that now it was time for us to move. After all the folderol of the last few days I was both tired and fed up with this nonsense. Any sensible port traffic control office would have been happy to see us tucked securely out of the way where we were. But no, we had to move. Right away, at 11 pm. Not in the morning. So we did. 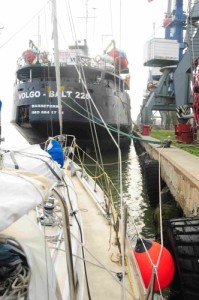 While Maxine began a 3 day exercise in debate, negotiation and form-filling, I did boat things and felt otiose. And we needed to get a Ukrainian courtesy flag, line up a Ukrainian shipping agent to handle our arrival in Kerch’, service our engine, get that bloody diesel fuel and connect up all the mast wiring.

We have a weather window approaching and I want to leave Russia tomorrow for the 2 day trip across the Sea of Azov to Kerch’. Immigration still has not received authority from the KGB to process our exit applications. So we sit and wait.

At 3 am tonight we are putting Rosie on a plane to Ukraine so she can meet up with Beth, then both will join the boat in Yalta. Rosie’s departure from a customs controlled zone but not as Tainui crew creates yet further difficulties for us (well, for Maxine).

As always, I am excluded from the endless Cyrillic conversations and negotiations. When I ask Maxine to translate she tells me to shut up and be patient. She is clearly enjoying all this nonsense but keeping me in the loop is an irritating and unnecessary complication, so she doesn’t. By now I have come to trust her implicitly and I acquiesce. She assures me all is going to plan and I should attend to blokes’ stuff on the boat while she flutters her eyelids at the nice young officials who litter out path.

We have one more authority to deal with – the Office of the Port Captain. We are off to see them shortly and we have no idea what sort of response we will receive [Note – Maxine has just been told that we also need clearance from the Azov veterinary and sanitation authorities. I think she will be able to dismiss that requirement successfully].

Readers will be aware that Maxine has many faults. I have carefully avoided reference to them in this website. What she does extremely well however, is negotiate with bureaucracy. She is assiduous and tireless. A gracious bully. In Azov she is now known, liked and respected by all of the authorities with which we have dealt. Maxine is a priceless asset in Tainui. The simple jobs – engine service, mast wiring and fuel transfer – have been left to me, while gorgeous Rosie has seen us all superbly catered for (Dirk, I know I end this sentence with a preposition).

On Wednesday, if all goes well, we will be on the open sea! Tainui is ready  and so are we.  We even have an old Ukrainian courtesy flag, donated by a kind deck officer on bulk carrier Volga-Balt 226. The flag is 15 square feet in size and I hope that impresses the Ukrainian authorities.