Another late start. We do them so well. The 70 mile trip to Bodrum was a sleigh ride in flat water with warm sun. With Tania’s expert touch the dead remains of my casserole ascended into heaven as we slid along the western shore of Samos. 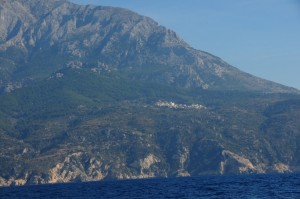 Tiny villages perched impossibly on steep mountainsides reminiscent of The Hazards. Their almost vertical olive groves must be a nightmare to tend.

As we sped past the Dodecanese Islands to the west, Pasha and I explored the charts for tonight’s anchorage. Our choice, similar in form to last night’s gorgeous spot, lay on the south side of Halicarnassus and we had high hopes of it. The wind dropped at dusk and we felt our way between unlit islets near the corner, with a long sprawl of city lights to the east.

While I enjoyed an old man’s power nap Pasha took Tainui the last 8 miles to our bay. I woke on approach confronted with brightly lit, wall to wall condominiums highlighted with tasteful orange lighting and fringed by palm trees in contrasting green floodlight. Not Halicarnassus! 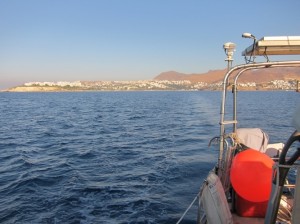 Oh well, I thought, many a mickle makes muckle. At least it is calm and we can sleep well. In an act of rare generosity I had done this morning’s chain flaking and I was mildly embarrassed when tonight the chain jammed as we dropped the anchor. In fact the problem – a kink in the chain at the navel pipe rather than my flaking – was not of my making, but my reputation was dented. By luck rather than good management we had narrowly missed a row of floats marking a swimming enclosure in the water ahead of us as we approached and, to cap it all off, the anchor refused to bury. We hauled it in to find an enormous glob of weed fouling the anchor flukes. Our second attempt was successful, fortunately.

With Tainui finally snugged down for the night and Pasha and Tania abed, I settled down to a late night coffee, only to find that in the dark I had added not milk but this disgusting stuff which my Russian crew wolf down every morning. It is a sort of watery curd drink whose container is indistinguishable from the milk carton. And now here I sit, at the site of one of the Seven Wonders of the Ancient World, marveling at my frailty and humanity’s questionable progress in the last 2 millenia.