After that endless, grey and windy crossing from NZ I do feel a sort of accomplishment, but is it enough to justify the broken rib, the burn, the damp and the tedium? Now that we’re here though, Patagonia is all that I had imagined. And more. Patagonia must be the sailing world’s best kept secret. We haven’t seen a single yacht, but we know from the Patagonia net that there are 16 of them spread fairly evenly over about 2,000 crow-flying miles and 50 times that in coastline. Some insist that is crowded, but villagers we meet say they have never seen one.

One marvelous effect of the voyage was the way it has garnished everything here with radiance. Sights, smells and sounds have been sumptuous in the extreme. As I write, Tainui is romping across Golfo Corcovado against a backdrop of snow-capped volcanoes. Magellanic penguins shuffle out of her way indignantly and whales are sounding around the boat. Brightly painted fishing boats appear on the horizon from time to time, but there isn’t another yacht in the entire cosmos.. 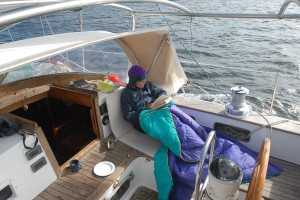 Tainui has been a genuine delight and I am very proud of her. All that work has paid off handsomely. Nothing serious has broken and she has looked after us superbly. In 2 weeks time we will haul her out of the water for the winter and fly home to confront the mortgage. Next spring…well, who knows? Further south though, for sure.