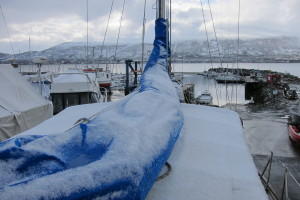 I don’t like arriving back at Tainui after extended absence. Long, freezing winters tend to play havoc with plumbing, pumps, haberdashery and electrics despite the most meticulous winterization. I’m not sure why. This time the Skattora Marina yard have done a sterling job keeping her dehumidified and warm, so there is no mould and she smells fresh. But still, down below I am reminded of those space stations in hibernation – everything is dead, unloved and it is all a bit forlorn. Add to that the jet lag, the mess of my half-unpacked bags and the nuisance of living aboard a boat high and dry, and you have a recipe for black moods. I have one. But everything will fall into place – it always does. 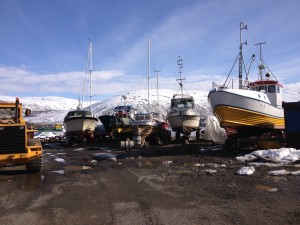 It is sunny but cold here, with residual snow banks in the marina, and snowy mountain peaks all around glistening in the hard light. One oddity about arctic Norway is that summer arrives much later than you’d expect it to. In 2 weeks it will be midsummer’s day and it is already light for about 20 hours out of 24. But there is more snow expected and by any sane measure it is only early spring. Autumn is the season for warm, still weather.

My major worry at the moment is the diesel engine. By the end of last season our dear old Ford was losing serious amounts of fresh water coolant – up to 1 litre every 4 hours. I had hoped this was just a heat exchanger problem but yesterday we pressure tested the unit and there is no leak. There being no external loss and no evidence of coolant leak into the engine oil, that leaves head gasket and exhaust manifold. The latter is the most likely. I replaced the manifold at huge expense in Maine a couple of years ago and I dread the likely delay we face in getting another one imported. I have 10 days to sort it out before the crew arrive. We have some 2000 miles of motoring down the Volga and Don rivers, if the authorities grant us permission to enter the inland waterway system. A dead engine we cannot tolerate.  All fingers are crossed.

Our plan is to depart Tromso on 16 May, weather permitting. We should clear out of Norway at Kirkenes or Vardo and I hope to start Russian entry formalities in Archangel’sk on 1 June, if the ice has cleared from the White Sea.

From Archangel’sk it is an overnighter to the Solovetsky Islands, a world heritage site soon to be closed to most marine traffic, they say. Then across to Belomorsk to enter the Barents Sea Canal, one of Stalin’s more notorious construction exercises.

That all seems so far away. For now, I have to deal with jet lag and engine coolant loss.

2 thoughts on “Getting ready for the next bit”