Our first night out from Bora Bora was thoroughly miserable – an uncomfortable reach under double-reefed main and staysail across very sloppy seas in 18-25 knots of gusty wind. It was too much for our little CPT autopilot, which meant a sleepless night hand steering through rain squalls with aggressive and mean-spirited attacks from rogue waves splashing into the cockpit.

Our course was to take us south of Maupihaa and north of Autotaki atolls, each to be passed about 15 miles off. We were in the middle of the ocean and clever John thought no more about either of them. After a palate-cleansing ale he went to bed, elated by Axel’s successful repair of the wind vane and happy in the knowledge that there was nothing but open sea for 800 miles until Beveridge Reef. The pilot book warns about currents in the vicinity of Maupihaa and while the skipper slumbered we were set north. Late in the morning it was keen-eyed Melanie who saw this low atoll dead ahead, some 8 miles off. We altered course and no harm was done, no thanks to yours truly! There is no moon at the moment and the same approach in last night’s murky blackness would have meant… well, I shudder to think.

The lesson – don’t forget to zoom in on your navigation track. At lower scales, our Navionics chart does not show these small atolls. Such a simple, foolish error, one which recently brought to a miserable end to one round the world racing yacht’s hopes.

I am abashed and humbled, yet again. 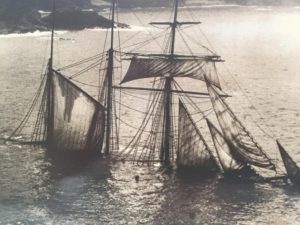 could have been us!