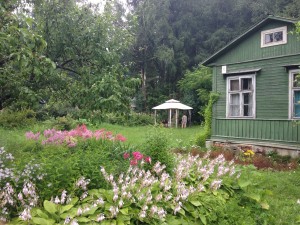 In Moscow we farewelled Dirk, who has fled to the emerald isle. He will be missed.

Our Moscow sojourn gave us a wonderful opportunity to catch up with Pasha and to meet his gentle, wise partner Tania. Their dacha 53 km south of the city is a jewel. 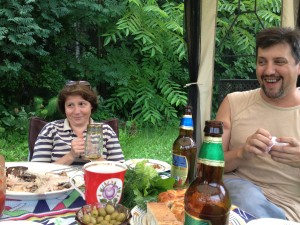 I met Lieve Cornet, a Belgian Moscow resident, who is joining Tainui for a week on the Volga. She used to manage a chamber orchestra and gave guided architecture tours of the city. Lieve rolled out the red carpet for me. How many feet can an old bloke fall on, I wonder.

In Moscow I also had an opportunity to meet the fabled Inna at last. She is Maxine’s Moscow mother, with whom Max chats daily while we sail. An elegant, stately woman, Inna is a music-lover after my own heart.

On a more serious note, I must revisit once more the Noun Clause Issue. With only 3 members, the august Society for the Preservation of the Subjunctive must at times be impossibly overworked. I am disappointed though, by the responses I have received from them. They do not seem to realise how beleaguered we have felt, at anchor on the Volga River with this huge, aching disruption in crew relationships. I have set out the society’s responses below in full. Draw your own conclusions.

I’ve forwarded this to my Co-Director (Enmore Branch) although, as you would be aware, this is not really a subjunctive issue.

I’m afraid on initial impulse, I’m with Dirk on this one ie we’re talking about the women here rather than the woman.

I’ll give it some more thought and my learned colleagues will place the establishment of a 24-hour Help Line on the agenda of the next formal meeting.

Incidentally, a friend of mine was interested in a society for the preservation of the Ablative Absolute in the English language and is looking for members. This brief email having been completed, I will continue listening to Mozart and drinking my takeaway latte.

Re: the events at the Kostroma marina.

Is English Dirk’s first language? If not, we can get away with asserting that his sentence is wrong, but that he could not be expected to be familiar with this subtle inconsistency.

Otherwise I have no authority for knowing that it is “gets”.

I hope Dirk get it.