I was sad leaving Ernesto Hemingway Marina in Havana. Lovely Peter, who had watched our mooring lines over the cyclone season, arrived with armloads of fresh vegetables to help me cast off. He had tears in his eyes. I shall miss him.

On the way out I looked the other way as Tainui passed the Canadian power boat. Its dreadful 70 year old owner had bought a relationship in Cuba with a 16 year old child in exchange for her parents’ home renovations. I know the local police had him in their sights but so far they seemed unwilling to do anything about him.

Out through the narrow channel onto smooth seas with a warm, gentle breeze. If you have to sail single-handed, this is the way to do it. The Gulf Stream just rips east between Cuba’s north coast and Key West. With 4 knots of current under her keel Tainui made short work of the passage to Miami.

I picked up a passenger off Key West, a gorgeous little golden oriole, who sat timidly on the Aries for most of the day. 10 miles off the harbour entrance I called USCG on channel 16 to advise them of my arrival from Cuba. “So why are you calling us”, they asked. At Miami harbour entrance I called them again and asked advice about anchoring and customs formalities. As to the former, I was told anchoring is forbidden. In relation to customs and immigration protocols they said they had no idea. They gave me a phone number and said to call in the morning. By then I could have offloaded my 50 tonnes of Havana cigars, my cocaine and my 25 illegal Cubano immigrants, but I didn’t say so.

I pressed the coastguard for advice about where I could stop for the dwindling remainder of the evening. They told me to tie up at Miami Beach Marina. At 3 am did just that. 2 hours later I was awakened by the marina manager who demanded $275 for my 2 hour stay. I told him to get stuffed. A compromise was reached and the marina got 100 of my precious dollars. Yep, Tainui is in the USA.

To cut a long story short, it took me 2 hot days traipsing round Miami and Fort Lauderdale chasing officials who could process my arrival formalities. So much for border protection! 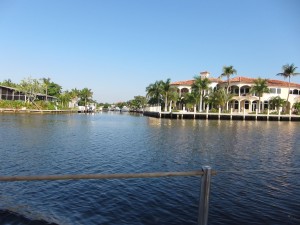 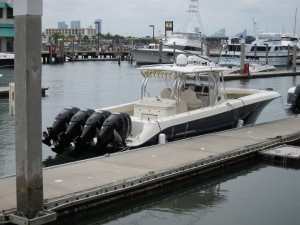