Who was Beveridge? I knew one curmudgeonly paediatrician by that name but this South Pacific jewel, our destination, is not named after him. We must research this.

The charts show Beveridge Reef as a useless blob without detail and the offputting annotation “position approximate – reported to lie 2.1 miles NE of charted position.” 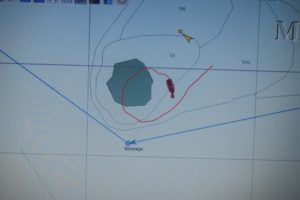 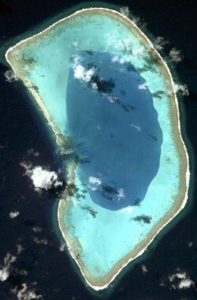 The emerging atoll is geologically new, sitting atop a volcanic seamount which rises abruptly 5,000 metres from the ocean deep. Its reef is still entirely submerged, announced only by a line of surf which we could not see until it was less than 2 miles off. No, it is not where the charts say it is, but this time Tainui’s chastened navigator was alert both to its proximity and the uncertainty of its position. The entry pass is easy, and the ovoid lagoon relatively clear of coral heads. Inside the reef it is rimmed with sand and perfect anchorage can be had in dazzlingly clear water anywhere around the edge. Excellent snorkelling and in the entry pass a nearby humpback whale. 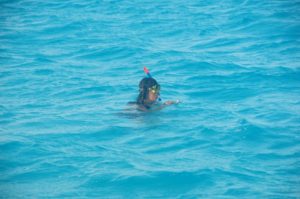 After a swim and pancakes (rather good ones, if I say so myself) we settled into a boisterous and rather lengthy happy hour. Then Jochen collapsed into bed for a 15 hour snooze while Melanie sat alone in the cockpit communing with her own private cosmos and humming tunelessly, as she does.

Now it is 4 am and the crew are both comatose. There is no moon but the sky is ablaze with stars. From the bow I can clearly see our chain stretching down to the bottom. Anchored over the whitest sand imaginable, we sit motionless. The fringing reef is only 500 metres away and the roar of the surf is loud, constant and a bit off-putting. There is nothing but ocean to windward for a thousand miles. Like Tristan I keep looking out for a ship, but there is none. We are quite alone in this perfect lagoon.

One of those unforgettable nights which feeds the dream. Right now I cannot imagine anywhere I would rather be.