18 days at sea and no sign of madness. And today no sign of wind either. The barometer needle has been dabbed with araldite. We’re now between widely spaced isobars, edging up toward the horse latitudes. Becalmed all night, we lurched without rhythm in the residual swell. Empty sails slatted noisily and dreams became strange, disturbing. Dawn this morning brought a grey, gently heaving ocean and an uncompromising horizon, sharp as a knife. 1 lonely gadfly petrel. It is a wholemeal bread and laundry kind of day.

Engine on, and with it the blessed bus heater. Of course, out here the engine doesn’t serve our passage any useful purpose, but it warms and dries the boat. This does wonders for our spirits.

Motoring isn’t what Tainui was built to do. It is a noisy, slow process.  Every mile is a tedious achievement. After a while you stop hearing the engine but inevitably a gloomy mood settles in, no matter how warm and dry the saloon has become. We would much prefer to be freezing cold and damp, romping downwind in a fresh breeze under storm staysail and reefed main.

Chris and I have started a tortured email discourse about the nature of human interaction. Ours in particular. I tell her that this trip to Chile is a one-off event, planned since she was the bareliest mote in her father’s eye. It doesn’t, hasn’t, won’t and can’t close the door on us, any more than does her time practising medicine in the desert. Any more than a stint in gaol, a course of chemotherapy, a bereavement would. I don’t know what else to say. Do my reassurances nibble away at her grittiness, or am I wasting bytes? How very much I love her.

The breeze has come back and we’ve been sliding quietly along. A gentle rhythm has been restored. Spirits have soared also, because we this morning we passed the halfway mark. I’m tinkering in the navigatorium while back aft Dave is trying to entice fish with a new and very seductive spinner. There are no seabirds in sight – I reckon that’s for the same reason Dave isn’t having any luck.

It has been the laziest of days – now we’re doing 6 careless knots over a sunny, almost flat ocean which imparts only subtle rhythms. Open hatches let the Pergolese out and warm drying breezes in. The barometer is steady but there are unmistakeable signs of approaching bad weather in the SW. We are in a very temporary paradise. 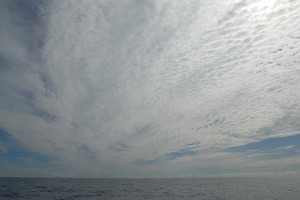 During the dark hours at sea the search for answers to small problems gnaws away. Not much beats the simple pleasure of coming across a solution, the more so when it is found to work. Such was our discovery today of two spare bolts the same size as the loosening grub screws in the Aries. The screws had worked ok but were always coming loose. That meant the Aries rattled. Removing them, re-loctiteing them and reinserting them had to be done blind, while I hung head down over the stern. These new bolts are large, can have mole-grips affixed for the insertion and are so much easier to use. And I found an old knife blade which worked perfectly as a shim for the loose tube. End of a 4 week niggling worry.