It is chaotic here in Barcelona tonight – fireworks and street dancing in celebration of summer solstice.

I have had a busy day visiting Montserrat, trying to come to terms with Peninsular Wars, Benedictine monasteries, Catalan independence movements, passions and futilities. It’s all too much really. Many tourists – more than 2 million visitors a year, I’m told. Mind you, there’ve been some luminaries among them – Columbus, Himmler, Wagner and me. The architecture is ordinary (all rebuilt after attacks by Napoleon and then Franco) but there is a very fine museum.

I am flying to Valletta on Monday to join the Open Arms rescue ship. Last night I met the Proactiva manager, a Spanish ER physician who has frightened the life out of me. Clearly it will not be a holiday. But first some art nouveau architecture, heaps of Gaudi, Miro and Traviata at Palau de la Musica.

Tonight I am on the street sipping sake with sashimi, chatting with a lovely Nepalese waiter who works his butt of here and sends all his earnings home to Kathmandu. Makes me a bit ashamed, really.

The purchase of Blue Dove is proceeding. She will be surveyed next week and the deal should be finalised in a fortnight. Extraordinary, but then, of course, you die. So why not? This website will shortly need some re-scripting.

Oh, and a quick quiz re the following two pics. Can you name the artists? 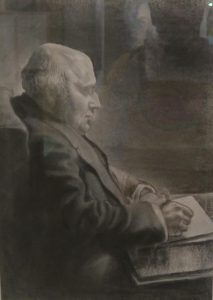