It has been a busy summer for Tainui.

It being too early to sail direct to Spitzbergen my rather ambitious plan was to use spring to explore the southern Baltic coast as far as St Petersburg before coming back west along the Finnish coast to the Aland Islands, through the Gota Canal which transects Sweden, to Norway. Well you have to do something.

So in early spring Ian and I pursued the whisky trail through the Western Isles of Scotland from Oban, then to Inverness via the Caledonian Canal and Loch Ness. April weather in Scotland can be vile, to put it mildly. But there were real compensations – great pubs, excellent food and fine beverages for starters, and my gorgeous daughter Rosie for seconds.

From Inverness the North Sea crossing to the Elbe was a fast cold beam reach. I had rebuilt the Aries in Oban but foolishly engaged the bevel gears incorrectly. That meant hand steering all the way as re-engaging the gears is not a job to be done at sea in 30 knots of breeze. Fortunately Ian’s daughter and her partner were with us and the crew of 4 made watches manageable.

Out of the swirling currents of the Elbe we transited the Kiel Canal, dwarfed by an endless parade of  container ships, before groping out through unbelievably busy sea lanes to Danish Bornholm Island and down to Gdansk.

Poland, Lithuania, Latvia and Estonia we remember as a succession of busy, decrepit post-Soviet ports with a rich mix of mediaeval and Stalinist architecture, lovely curious people and absolutely no other yachts. Not enough wind though.

Chris joined Tainui for the trip to St Petersburg from Tallinn and brought to the boat an element of style, grace and beauty missing since Ian’s daughter Lucy and Dylan had left. In spring Tainui was the only foreign yacht in St Petersburg, a fine cruising destination and worthy of a separate cruising report. What an incredible monument to Romanov hubris that city is. And meanwhile, in the rest of the country…

I got some great ideas from the Hermitage for renovating our house in Sydney.

The RCC representative in St Petersburg is Vladimir Ivankiv and his assistance with bureaucratic issues and matters maritime generally was absolutely superb. A lovely bloke.

Ian and his wife went off chasing Italian gardens from St Petersburg while Chris and I took Tainui to Helsinki. There another crew change – Andrew Dix and Margaret Winn took over from Chris (well, not really). Chris feels the call of the remote Australian outback strongly. Or is it just the rheumatic fever, scabies, NIDDM and the flying doctor flights?

After intricate pilotage among countless skerries and tiny islands along the Finnish coast and the Aland Islands, the Swedish Gota Canal comes as a delight, so long as you can cope with the 58 locks which, when filling, are like an olympic kayak slalom course. 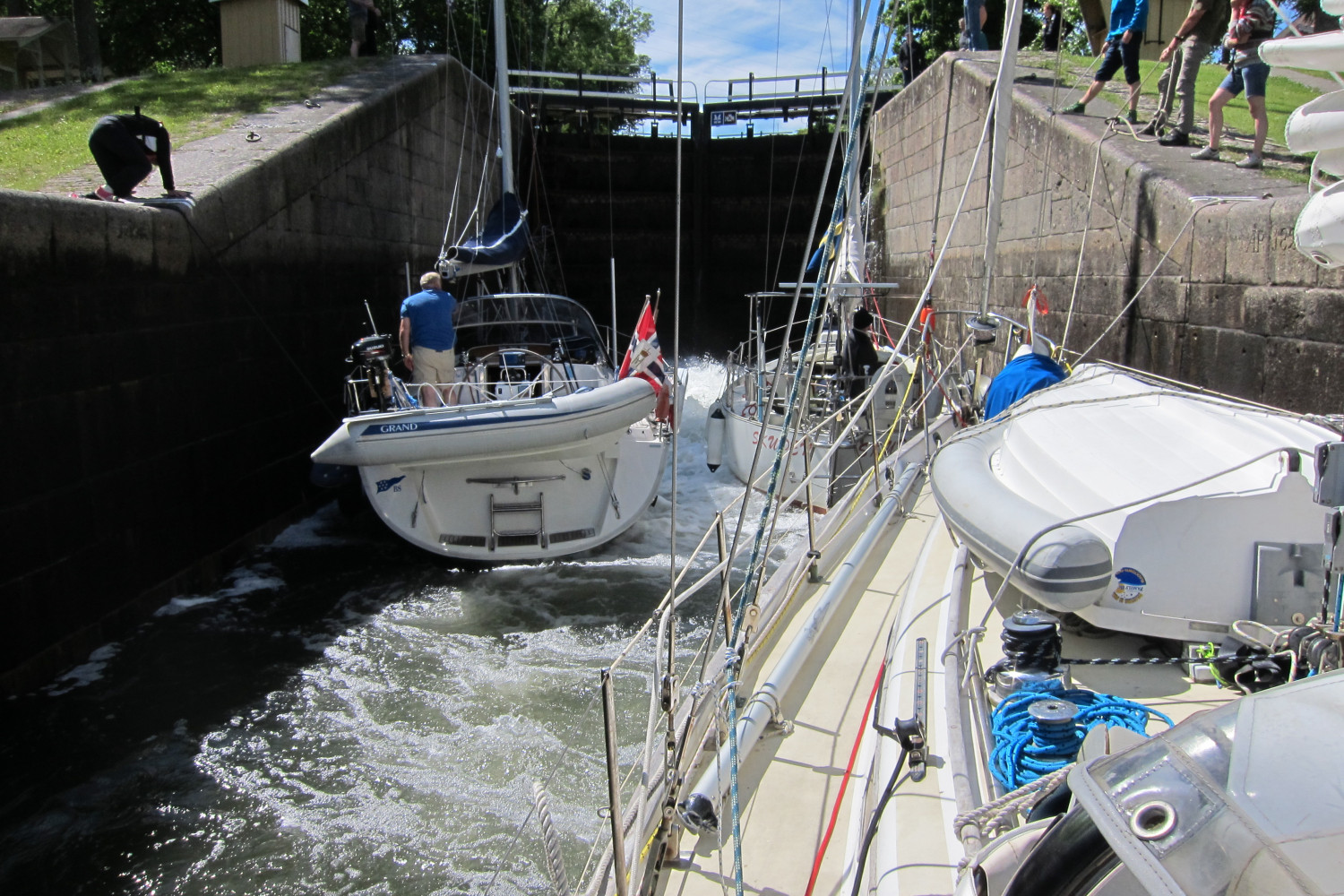 Poor Tainui got quite agitated in those locks, though Andrew and I were soon used to the process. Under cloudless skies, the narrow canal a sheet of glass, for a week we motored gently between great fields of lucerne, picture book villages, castles and lush forests. Lupins, daffodils and lilacs, Dragonflies and fat bees. What a contrast with what followed in the Barents Sea.