Sipping coffee I watched brilliant little emerald kingfishers swooping over the water. Pasha and Tatiana were shopping and Rosie was planning today’s meals. It is cold and a fresh northerly is blowing. This breeze has been remarkably constant in direction if not force, and I suppose this is the tail end of the meltemi.

We roared down the Dardanelles to the dogleg with 3 knots of current, then motor-sailed through the narrow stretch across to Anzac Cove where, like so many Australians, New Zealanders, English and Turks before us we turned off our engine. The cliffs before Anzac Cove Turkish fort at the Dardanelles dogleg Into our sixth sea this season we slid down the Aeolian coast with poled out yankee and full main. After dark we crept into the open bay at Severice where, to my relief we found flat water and good holding. A splendid curry washed down with vodka Russian style (straight no chaser) made a fitting end to a pleasing day.

Notable events – at 3 pm Tatiana announced that she was not cold (a first for her); during an involuntary gybe we broke the snap shackle on the boom brake handy billy; Pasha steered all the way and I knocked over a cup of pleasing medicinal fruit cocktail (in memory of Maxine). I must say though, it is really very cold. Still, the crew sunbathed, as the following photos confirm. 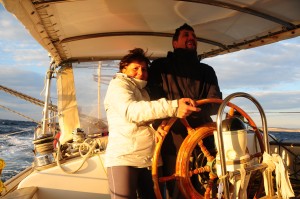 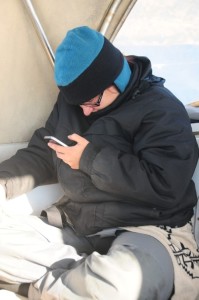 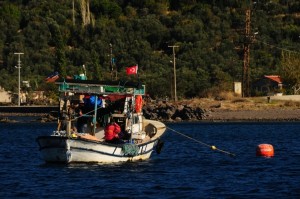 Now we are enjoying our ritual 6 cups of strong coffee and contemplating the day ahead. The bold Lesbos coastline lies to the south and the fresh and gusty northerly winds have Tainui constantly nosing from side to side. Cold, yes, but is sunny, with the windward shore and a small fishing boat etched in hard clear light. I suppose Maxine would be swimming if she were here. But she’s nuts.

We are headed today for Diliki, where I hope I can take a shore party to visit Pergamon. Then (and I don’t like to think about it) Rosie packs her bags and goes home to her new job in Australia.

2 thoughts on “Aeolian yes, but no harps”