Last night, at the Royal Australian Naval Sailing Association, I attended friend and sailor John Vallentine’s launch of his new book, “Sailing Through Russia — From the Arctic to the Black Sea”. It is a great read and documents the first-ever voyage of a private yacht from the tip of Norway to the Black sea through the canals and rivers of Russia, traversing both the Don and Volga rivers.

His Russian-fluent Dutch crew and grand vizier for the voyage, co-author and Moscow resident Maxine Maters, was there as well. It was a delight to see John again and meet the charming Maxine. John is truly a legendary sailor and has taken his F46 Tainui to places no one has gone before, not to mention many mostly seldom-visited outposts along the way during his many years of voyaging. 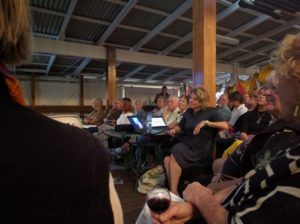 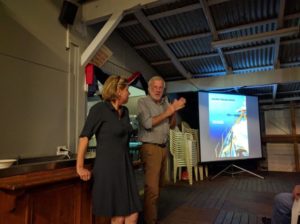 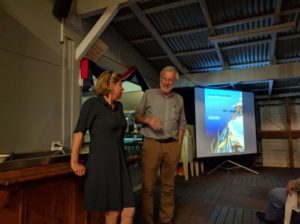 The photos he showed us of his journey are magnificent. Along the voyage through fjords, locks, canals, channels, lakes and rivers were the historical remnants of layers of Russian history visible in the overwhelming beauty of onion-domed churches, mouldering Soviet-era brick factories, rusting machinery, abandoned equipment, and the subliminal memory of the near-slaves who built the canals and locks and hauled the barges by hand up and down the Volga. As well, John gave us a glimpse into how it felt to be warmly greeted by local residents, who always brought food and vodka when they visited. At every stop the local media showed up to record the historic event. This is cruising like it used to be.

They HAD to write a book! No way out of it.

See http://www.sailinginrussia.org/ and https://tainui.org/ for more about
the voyages of Tainui and the book.