Natal was the nicest, mellowest, coolest, palmiest and easiest place we’ve been since Nelson. No other yachts (we hated all the pretension of the French cruising community at Cabadelo) and the prettiest little club a short row away. 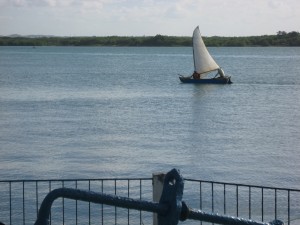 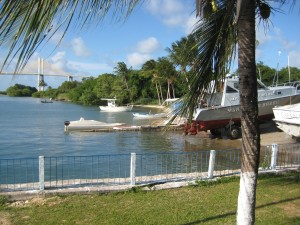 We set off last night at 8, bound for Trinidad. I have decided to bypass Venezuela because the violence against yachties has escalated a lot in the last 12 months. 8 violent attacks and one murder. Everyone tells us it is just not worth it. I take their advice. We may however, stop off in French Guiana and Surinam.

We have taken sad farewells to the samba. I have out-of-tune musical PTSD, I know. Give me just one real for each rendition of The Girl From and I could fund my own psychiatric care forever.

I needed a rest from Brasil. It is far too big, noisy, dirty, exuberant, dangerous and vibrant. The friendliest people, except those that attack you. I never got used to keeping my money in my shoe, not carrying a camera or shoulder bag, nor wearing a watch. David was mugged 3 times in Salvador, which statistically is the only reason I wasn’t.

I must say though, that we have had a wonderful time.

After two days dithering about in fickle winds we found the NE trades. They talk about the corner of Brasil and how sailing is transformed there. How true that is. Suddenly we have 2 knots of favourable current and a beam wind. The sun has just set on a tranquil sea and we’re gliding along with breeze soft as baby’s breath.

Now, loping across a smooth ocean at sunset, we dine on olives and cold beer. Dave says he’s been planning the meal all day, and wonders why anyone would want to eat at a restaurant when such rich food can be had at home. In Natal we spent handsomely (more than 10 dollars) on fresh fruits – papaya, melons, limes and mangoes – which have been wonderful.

We have been rushing along in a fresh beam winds seemingly forever, with flying fish skittering out from under our bows. Exhilarating but quite uncomfortable sailing has allowed me only short sits at the computer and my enthusiasm for writing has been low and the error rate high.

Spare moments have been spent asleep or wondering whether Harriet was really dead. Chris was quite right, it was a perfect read for this trip. Less so Cold Chain Harbour, which didn’t go well with Dave’s solipsism in Natal and the first day or two out. I was a bit disappointed by the Yates book. His clear prose reminded me of Scott Fitzgerald, but I just wasn’t receptive to all that bleakness. Small, unhappy people in a small, unhappy world. I will be interested to read some more of his stuff though.