Calm grey seas and intermittent showers. Clusters of fishing boats at the 20m line, which is almost 20 miles offshore hereabouts. I thought ennui were Eskimos till I discovered Brasil’s coastline. Henry Ford is tireless but we need a break from this relentless motoring.

Santos, the largest port in South America, doesn’t have much to offer pleasure yachties but appeals to our commercial backgrounds. We have decided to stop in there to get fuel and a bit of silence.

I want to talk about books with someone. Barack Obama came hot on the heels of Alice Sebold and Katherine Mansfield. I hope he does as much for the world as he has done for my last 200 miles. He is very thoughtful man and his quest for insight into his roots makes for intriguing reading. He examines urban black culture in Chicago and the relationships between racism, poverty, disempowerment and social decay, then looks at the same issues in Kenya. Why the difference, he asks. I don’t know that he has a single answer but he says low self esteem beats poverty and racism every time. Bells ring. He writes easily and although the book is too long you are left with an real sense of his intelligence, integrity and social commitment. How exciting it is to think that this author is president of the usofa. The Santos seafront is a seemingly endless line of high rise buildings hull down on the port beam – a million white dominoes side by side, obscured intermittently by heavy showers. Dozens of ships are at anchor in the bay, waiting to load. We enter the river at 6 pm accompanied by scruffy little fishing boats with pointed red and blue bows and no mufflers, and fat cheerful blokes returning to their hearths.

We are the only foreign yacht at the marina, a quaint little affair at the end of a mangrove walled creek. A thousand egrets watch us critically as we pass. All landfalls are wonderful things but the excitement I feel approaching a big industrial port is special. Like first day at school. The mild navigational anxieties, the smells, sights and sounds which assault the senses (as if there was no sensory input at sea. As if.) And when Tainui is tucked safely to bed there is relief. It was by no measure a challenging trip but the pleasure at a job safely completed – the sense of accomplishment even – is a fine feeling. Then there is the complete absence of imperatives, the blissful silence, the stillness. It is almost too much. 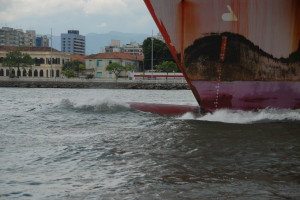 Dave is well into his cups – I am glad he foregoes a shower tonight because he’d have trouble getting off the boat. But he still manages a good omlette with chips, bless his heart. He wants Chopin nocturnes because of his Richard Flanagan read. I put on Freddy Kempf, which was a mistake – I find myself tearful, adrift, alone and longing for someone to share the music with. Then into deep sleep, in a fine steady rain.

Santos is a run down shipping port which feels honestly working class. By 9 am it is 33 degrees and humid as. Everything is an effort and I am constantly drenched with sweat. Immigration formalities took a good half day even without Aduana and Sanitario. I buy coconut milk by the nut, hacked open dextrously by a a black man with a dazzling smile. Cervesa at the end of the day, as crowds of workers on bicycles queue for the ferries. There is a superb fish market, fecund tropical vegetation, light rain and diesel. The river throngs with fishing boats and big ships.