We’re bypassing Puerto Natales, so Puerto Eden (pop 140) is our last human contact before Puerto Williams. It is a poor, lonely outpost. But when the current sweeps you round the point out of the Inglese Narrows, the settlement comes as a nice surprise. Especially when you had decided you were absolutely the only people on the planet. Cheerful, brightly-painted little houses cluster around the bay, with tide-stranded fishing boats and friendly Mapuche locals. The colours, set against a grand backdrop of snow-covered mountains, have come as something of a shock after the soft shades of grey to which we’ve grown accustomed.

Puerto Eden is apparently named after a British warship but details are scant. I am sure some military historian will be able to fill in the details for us. The bay is well protected from prevailing nasties from the north, but I could imagine south-westerlies being miserable here in winter. The barometer is high and I don’t expect terrible weather in the next 12 hours, although the weather systems cycle through very rapidly it seems. 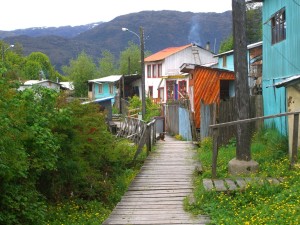 We rowed our 10 jerrycans ashore and someone has promised to fill them. Tomorrow we will ferry them back out to the boat. A local lad has agreed to dive and inspect Tainui’s forefoot – we shook keels with Chile in an intimate and unexpected way a few days ago and would like to know where and how much of a mark the rochas left. 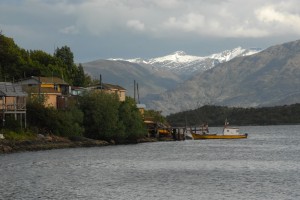 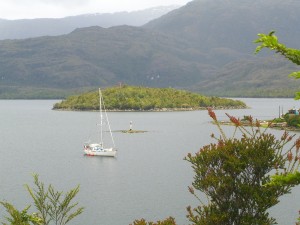 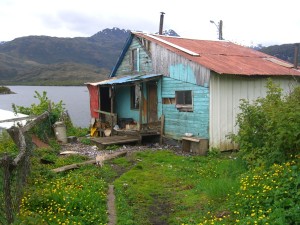 We dieselled, watered and had a cheerful diver check the effects of our brush with terra firma – scratches but no structural damage. Tainui’s heavy hull was laid up nearly 40 years old, before they knew how light you could build in fibreglass. I think age hardens the glass, too. Anyway, she”s as tough as old boots.

Perhaps with an excess of caution we’re using two 60lb ploughs on a single 180′ rode of 3/8″ chain. We’re in 30′ of water and the bottom is mud, so even exposed to the south I doubt we’ll go anywhere.