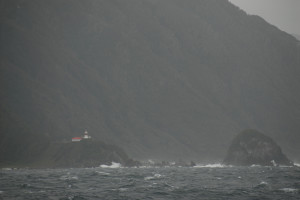 Cabo Raper departure, before the gale

We ran square at 8-11 knots, rolling and lurching sickeningly in steep seas coming from every which way. I had about 40 sq ft of yankee unrolled and pulled in hard with both sheets. I haven’t used the yankee partially furled before because I don’t like the loads put on the leech and foot, but the thought of going forward to set the storm staysail was not appealing.

Canal Messier has a 5 mile wide entrance and a lighthouse, but still, we were rushing down onto an unfamiliar lee shore in the dark at 9 knots. A bit of a worry. Especially when there is so much confusion about latitudes and longitudes in these waters. The C-map plotter cannot be trusted – it, the Admiralty Pilot, the Mantellero guide and most of our paper charts put San Pedro light 2 miles from its GPS position. Given the extensive, lethal shoals to the west of the light, this is unsettling. We chose to accept the RCC Guide and the Ardrizzi book positions while waiting for radar contact. I was glad indeed when the little green fluoro smudge appeared on cue. Ardrizzi and RCC are right.

The seas improved immediately we passed San Pedro light into Canal Messier. By now it was pitch black but we groped our way along the lee side of Isla Schroder until we found the entrance to Caleta Ideal on radar. We entered and anchored in the middle of a circle of green radar flourescence without the faintest idea of what it would look like by day.

During the course of yesterday the barometer fell over 15 millibars. On this morning’s Patagonia Net a number of yachts commented on yesterday’s winds. Even Wolfgang and Gaby had to forego their balcony breakfast at Villarica. But here the sun is out, the waters of the caleta smooth and the boat is dry. The barometer is rising. The low, wooded shores ring with bird calls.

Total damage – one lost oar. Lessons – radar is wonderful, Golfo de Penas is not a nice place, and “Tainui” is a splendid sea boat.