After the longest, most tedious motor sail we finally tied up at Vitoria YC soon after dawn. A joy to turn the engine off. 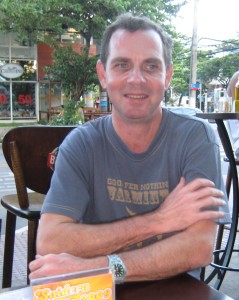 Logan Colquhoun, our man on the ground in Vitoria

The waterfront is fascinating, it being the service centre for the offshore drilling rigs. Multiple harbours and inlets like a playstation version of Rio. Chaotic vestiges of a rich colonial past are surviving the 21st century, with a fortified monastery, riverfront slums, godowns and stately buildings between the usual high rises. We slept and slept.

Exhausted, I have spent all day on “formalities”, as they are called. Boring I know, but the formalities process must be described just once:

First a long taxi ride through morning traffic to the aduana which opens at 8am. At the door I am told I cannot be seen because I do not have long trousers on. I have clean long bermuda shorts and boat shoes and look, I think, quite attractive. Nevertheless the receptionist, who is wearing a very short dress and has bare shoulders, is quite firm about it. Fortunately someone in a position of power intervenes and I am allowed upstairs. There an officious secretary in jeans and bare shoulders again admonishes me about the shorts. I say all other aduanas we’ve been to haven’t minded. Doesn’t matter she said. Then I discover that the aduana section won’t be open till 10am. I sit down in shorts and doze till then. I awake with C6 paraesthesiae and pain, which has been slowly getting worse over the last 2 weeks. Then I discover that our Sao Francisco Aduana form was incorrectly filled in by the officials there. It took another 2 hours before that is sorted out and I am finally given the OK, with a last salutary warning about long pants.

Next is Policia Federal. Frightened now about my bare legs I take a taxi back to the boat to get long pants. At the boat I am told I must move Tainui immediately because of something or other. That takes an hour in hottest sun.

Next a long taxi ride out to Policia Federal, to an address as directed by the yacht club and our 2 cruising guides. After a long wait at the immigration reception counter there I am told no, I have to go to another office of the Pol Fed, at the airport on the other side of town. No problem, they are open all day, they say. Another taxi trip. Off we go.

At the airport information counter a helpful young child phones airport Pol Fed and I am told come back at 2pm. I insist. Finally the this delightful girl convinces Pol Fed to see me. We spend half an hour getting through security gates to the Pol Fed office, where a charming bloke does it all in 5 minutes and wishes me bon voyage with a firm handshake.

Next a taxi back to my last stop, the Capitainia dos Portos. There is no one there. After a long pantomime discussion with armed guards at the gates I am finally led to the radio control office. It being 45 deg outside, the icy aircon is almost too much. I wait for an hour, either dozing or watching an 11 year old naval rating play nintendo. Finally Sgt Oliviero arrives and does the paperwork for me. Then he disappears for half an hour to find a stapler to staple the papers. That done, I take my final taxi back to the boat, exhausted and drenched in sweat.

That’s what they mean by “formalities”.

After getting cash at a Westfield-type centre we bring to boat in for refuelling. A swim in the club’s urine-temp pool and then a cold beer at the club. And one of Dave’s cigarettes. Yes, the second today. That night, at 0830 Sydney time I leave birthday greetings on Chris’ answer phone. Then a lomo and papas fritas meal which I could barely eat.

All day it has been blowing 25 knots from the north. The windsurfers are making hay. We are tired and a bit indecisive. Sitting on the Iate Clube verandah drinking and talking with the local sailors (all of whom say don’t even think of sailing north till a cold front comes) Dave and I decide to wait another day to see whether the winds are on the increase. It will allow time for laundry, bending on the new mainsail, sleep, and supermarket shop at relative leisure.