We are now in Chacabuco, whose main claim to fame is that it is a bit bigger than Puerto Aguirre. The anchorage is secure however, surrounded by rocky, steep hills with emerald patchwork. And close above them tower snow-covered Andes. We are in the heart of the mountains and it feels it. 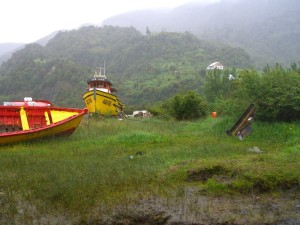 Splashes of colour at Chacabuco

We’ve come back north to drop Martin off and he will be sorely missed. A low pressure cell has been stationary off the Chilean coast and there’s been little to do at anchor in Chacabuco except eat, read and hang on. We are deep in the Andes, with snow-capped peaks all round, so it is not surprising that williwaws have been tearing down out of the heights over the last 2 days. Violent squalls arrive out of nowhere and depart just as suddenly. While they’re here though, they are always disconcerting. In 12 feet of water we had one 60lb plough and 180′ of 3/8 chain out, in soft mud.

Altogether we’ve got three 60lb CQRs, a rusty 35 pounder and a 44lb Danforth. The danforth lives at the taffrail and serves as brake and general kedge hook. There is a total of 400′ of 3/8″ chain, about 1000′ of 5/8″ nylon anchor rode and 4,500’ of braided poly shore lines. There was nowhere to drag to on this occasion, so we didn’t bother with further ground tackle.

Last night we heeled and lurched in sudden, random and very violent williwaws. A very unsettled night during which a ringing phone wouldn’t’ve been heard. Well over 60 kts in the puffs. We dragged 100m or so but there was nowhere dangerous to go (when we left we found a big flour bag draped over the anchor fluke). Our Australian ensign suffered badly in the gusts and bravely I went on deck to furl it at 3am – is that a metaphor? Today the wind has died but the drizzle drizzles on. Dave tells me the annual rainfall here is 3 metres.

I have to go and pay my respects to the 11 year old captain at the Armada station. The lads are keen to go ashore after we’ve had the pancakes. Smoke curls from the brightly painted little houses on the waterfront. It is Sunday and I expect the entire population of Chacabuco will be nestled snug in front of their wood fires. Wisely, the town will be dead. Today I just want to sit and mooch with Chris.

In this morning’s sun everything sparkles. Elegant little fishing boats drape themselves along the rocky shore like van Gogh images. We slipped and slithered up through wet grass between bright blue and orange fishermen’s huts to see Martin onto the bus for his long trip home to NZ. He has been a tower of strength. Well-fed and mange-free dogs smile and wag. Fishermen greet us cheerfully. Groups of children wait on the main road for the school bus. Looking down at the boat I wish I’d brought my camera – “Tainui” looks so graceful and purposeful against the stunning backdrop of soaring, snow-clad mountains.